After my last educational wyckoff post – I had a lot of comments, questions and so on.

The idea was to post the basics and show the concept – there has been a lot of the overlay, breakdown and other people jumping on this. It was a move we called on the 18th of March (see the “they blew up the rocket” post).

In terms of some simple education, Wyckoff is deep and possibly too deep for newer traders. What I was trying to highlight was the existence of such techniques. In part one;

I only covered the point of how the distribution phase was playing out in Bitcoin .

In this post, I will share some additional depth – for those of you already familiar with Wyckoff techniques you already have this. So we are not covering here ( volume , how to identify or any of the more advanced stuff or terms like creeks or mark-ups and downs) Just another simple intro to the basics & a step up from post one.

So if you have not seen the first post; check it out here by clicking the image.

So in the previous post & it was fortuitous that Bitcoin was a near textbook example of the distribution schematic #1.

The second type of distribution schematic looks like this;

As you can see, there are a lot of similarities & it can be confusing, but this is where it’s best to dig deeper into the concept, why volume plays a big part in Wyckoff techniques and gain an understanding of the naming convention for each of the events inside.

** We have a naming convention key below **

As well as distribution you also have accumulation and this also has 2 (major) schematics;

The first phase or ways to identify a schematic forming is with what is called a PS (Accumulation) or PSY (distribution) – this is basically the change of character as the trend moves towards a schematic; Preliminary Support (PS) and Preliminary Supply (PSY). The first significant reaction that occurs after a prolonged rally that

You then have a BC or SC – buyer climax / sellers Climax; the obvious BC in an uptrend suggesting institutional operators cashing out. and the inverse with the SC .

The next major event is the AR – Automatic reaction (rally) – The reaction that occurs after a Buying Climax. It occurs without previous preparation, hence the word “automatic.” and in layman terms it’s the exit of large positions after a climax ( SC and BC ) event.

ST next – this is a second test (ST) A name given by Wyckoff to the reaction following Automatic Rally, (or rally following the Automatic reaction.) If that test is associated

with small range and light volume — it increases the likelihood that the previous trend is over.

In distribution – you then have two major differences over the accumulation schematic; UT = Up Thrust and a UTAD = UP Thrust after Distribution.

For distribution you have a spring, think of this like the last drop before moving up rapidly out of a schematic on the Bullish side.

You then have “Test” phases usually of the support and resistance levels (zones) created by the schematic as shown in the images above.

And finally you have LPSY for distribution Last Point of Supply – A point at the end of the process of distribution where the Composite Man (Large operators) recognizes that demand forces have exhausted themselves and it is safe to start marking down prices.

Last Point of Support ( LPS ) which is the accumulation equivalent – A point at the end of the process of accumulation where the large operators recognizes that supply forces have exhausted themselves and it is safe to start marking up prices.

This is still only the basics, not looking at phases or volume or anything else yet. It’s worth going away and studying this in a little more detail to get familiar with the concepts and terminology and in the next post I will cover the phases.

I know a lot of you readers are here purely for the crypto/ BTC calls made – and another logical reason we are still liking a slow move down at this level, comes in the current DXY situation. See this post below as to the current situation there. (the relevance might be small – But understanding the forces at work, with DXY to BTC . Is actually useful). 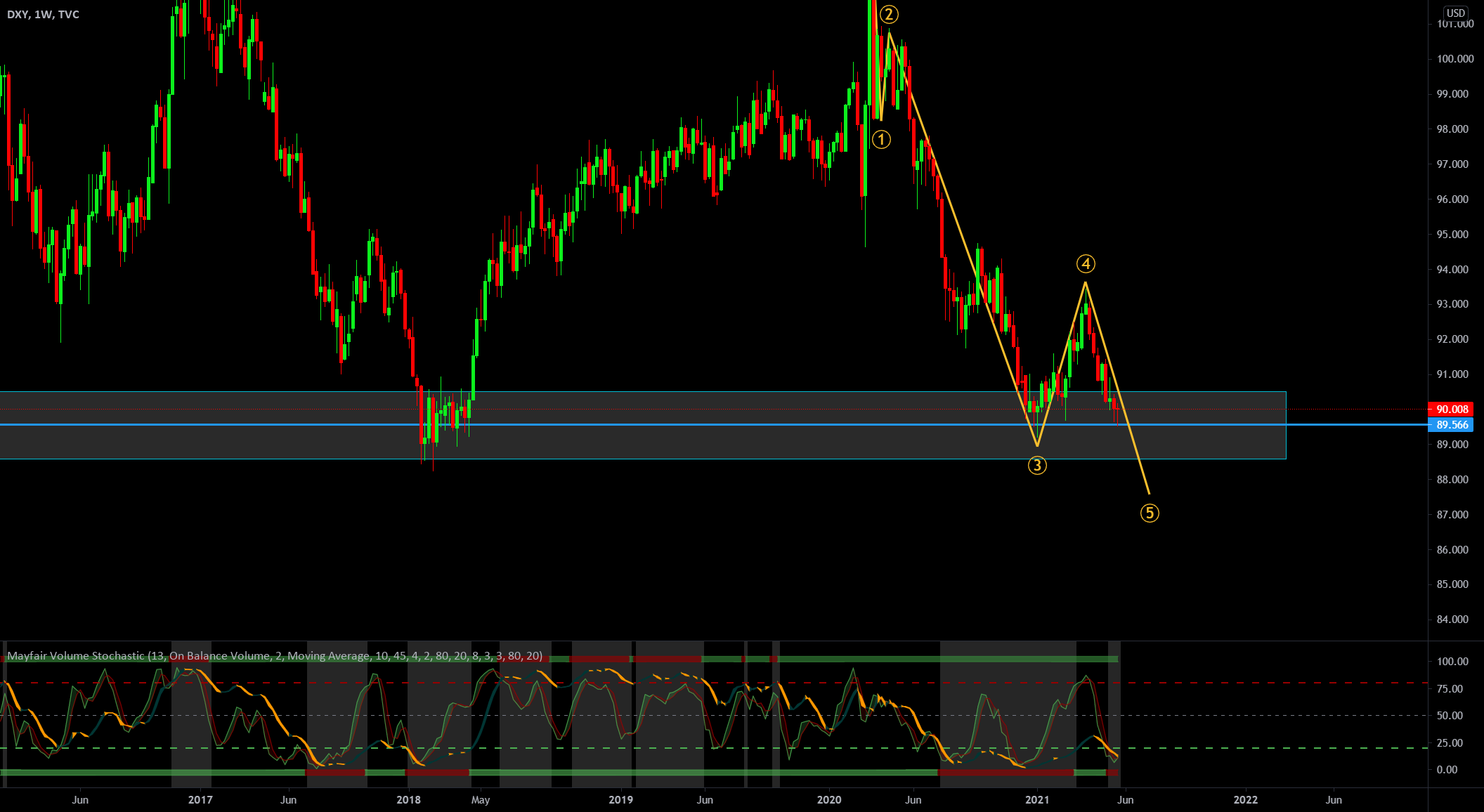 This idea does not constitute as financial advice. It is for educational purposes only, our principle trader has over 20 years’ experience in stocks, ETF’s, and Forex. Hence each trade setup might have different hold times, entry or exit conditions, and will vary from the post/idea shared here. You can use the information from this post to make your own trading plan for the instrument discussed. Trading carries a risk; a high percentage of retail traders lose money. Please keep this in mind when entering any trade. Stay safe.